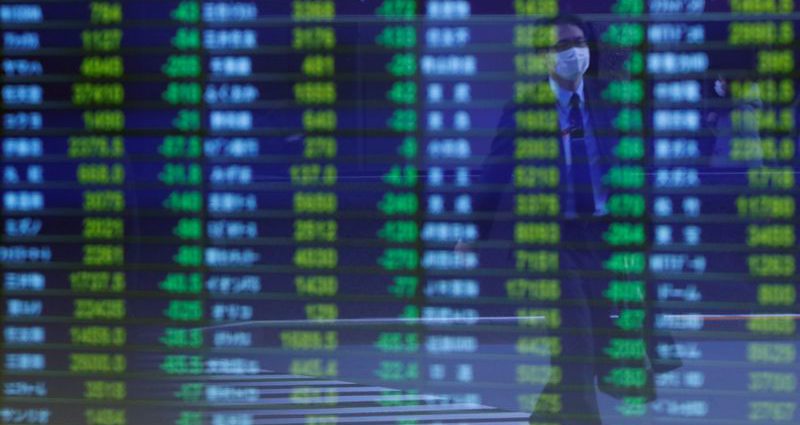 Asian stock markets eked out a 10th consecutive session of gains on Wednesday, but momentum ebbed as doubts about the global recovery from the pandemic returned ahead of the U.S. Federal Reserve meeting.

Focus has switched to the Fed’s economic outlook and whether a steepening of the U.S. yield curve during last week’s bond market selloff might prompt intervention at longer tenors.

“The Fed tonight is a key variable in determining whether this is a pit-stop or U-turn,” said Vishnu Varathan, head of economics and strategy at Mizuho Bank in Singapore.

No action is expected from the Fed, but any hit of taking the foot off the pedal could hammer risk sentiment and lift the dollar.

The Fed’s economic projections, guidance as to how long and how low rates can be held down and the prospect of yield-curve control will be closely watched, Varathan said in a note.

A statement from the Fed is due at 1800 GMT followed by a news conference half an hour later and markets seem to be idling ahead of that. S&P 500 futures rose 0.6% to recoup some of Tuesday’s losses, but other moves were smaller.

After weeks of ignoring woeful data, the prospect of a slow recovery now seems to be weighing on investors’ minds and feeding into growing expectations for the Fed to do even more.

China’s May factory gate prices fell by the sharpest annual rate in more than four years, data showed on Wednesday, a sign the pandemic is dragging on global demand.

Overnight, data showed German exports and imports in April posted their biggest declines since records began in 1990. The country is facing its deepest recession since World War Two.

“We expect the Fed will do more especially when the ‘unprecedented’ 2Q20 comes to pass, including expanding its various lending programs and even dabble into yield curve control,” analysts at Singapore UOB Bank said on Wednesday.

Currency markets were largely becalmed ahead of the meeting, with risk-sensitive Australian and New Zealand dollars steady after being repelled from multi-month peaks they hit early on Tuesday.

Oil prices were on the back foot on renewed concerns about oversupply and underlying economic weakness. Brent crude was last down 1% for the session at $40.72 per barrel and U.S crude was 1.4% weaker at $38.38 a barrel.