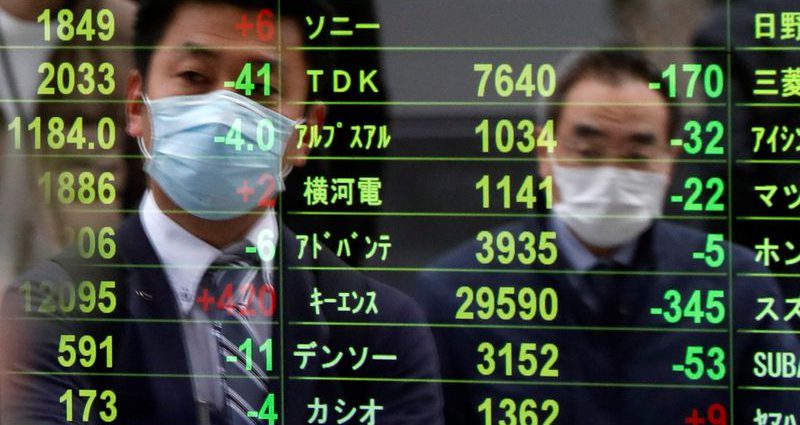 Oil took another eyewatering 8% tumble on Monday and world shares buckled again as fears mounted that the global coronavirus shutdown could last for months.

There were some bright spots, with Australian equities posting a standout jump as the government launched a super-sized support programme, but that was about it.

Japan’s Nikkei had led the rest of Asia lower and Europe’s main markets slumped by 1.5-2.5% in early trade, adding to what has already been the region’s worst quarter since 1987.

The rout in oil took crude to its lowest since 2002. Brent was at only $22 a barrel by 0815 GMT, hammering petro currencies such as Russia’s rouble, Mexico’s peso and the Indonesian rupiah by as much as 2%.

It didn’t help that the U.S. dollar was back on the climb. The euro and pound were both batted back by about 0.6%, leaving the former near $1.1070 and sterling at $1.2350. On Friday Britain had become the first major economy to have its credit rating cut because of the coronavirus.

Wall Street futures had also backpeddled into the red, having been up as much as 1% in Asia after a late flutter of optimism.

Most other markets were down but trimmed earlier losses. Japan’s Nikkei dropped 1.6%, Shanghai blue chips were down 0.9% and there were sharper drops in Southeast Asia, with Singapore’ benchmark index down almost 3%.

JPMorgan  now predicts that global GDP could contract at a 10.5% annualised rate in the first half of the year.

“We continue to mark down 1H20 global GDP forecasts as our assessment of both the global pandemic’s reach and the damage related to necessary containment policies,” said JPMorgan economist Bruce Kasman.

As a result, central banks have mounted an all-out effort to bolster activity with rate cuts and massive asset-buying campaigns, which have at least eased liquidity strains in markets.

China on Monday became the latest to add stimulus, with a cut of 20 basis points to a key repo rate, the largest in nearly five years.